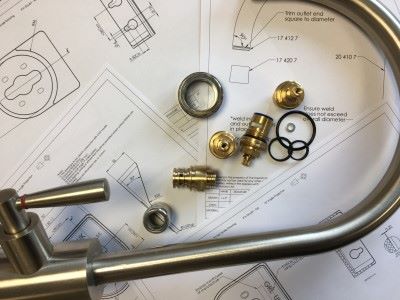 TapSparesUK is part of the GREG ROWE GROUP - a second-generation, family-owned business that has been designing and manufacturing high quality taps for over 40 years. A kitchen tap is one of the hardest working fixtures in the home, so over time, it is inevitable that normal wear and tear will cause a taps valves and seals to deteriorate. In recognition of this, we have sourced and manufactured quality, fully compatible replacement valves, seals and components for over 200 different kitchen taps.

Our extensive knowledge of tap design and engineering also means that we’ve made it as easy as possible for you to find the correct replacement part for your tap. Forget counting splines or measuring spindles, TapSparesUK’s step-by-step selection process will help you get it right. Simply find your brand above to browse the selection of taps and find the replacement valves or o'ring and seal kit required for your tap.

To get started, simply click on your taps brand. If you don’t know your taps brand or need help identifying spare parts, get in touch with the TapSparesUK team. We’re here to help. Call 01603 559096 or contact us.

When a taps old valve is removed, it’s common for a chunky brass ring - also known as a bush - to come out with the valve. If this has happened, don’t worry. Although the ring might seem to be tightly stuck, it should be possible to remove it with a dab of Loctite 638, a specialist, WRAS approved metal adhesive.

Wipe the ring and the inside of your taps valve cavity, then dab a little Loctite around the thread on the ring. Screw the ring and valve back into your tap. Allow at least 20 minutes for the Loctite to dry. Then, unscrew the valve again. This time, you should find that the ring or bush remains inside the taps valve cavity. Note, only Loctite 638 should be used. If you’re still experiencing problems, we can supply replacement bushes for many taps, too.

For further hints and tips on how to replace your taps valves or seals/O rings, watch our videos.

Having trouble? Take a peek at the frequently asked questions